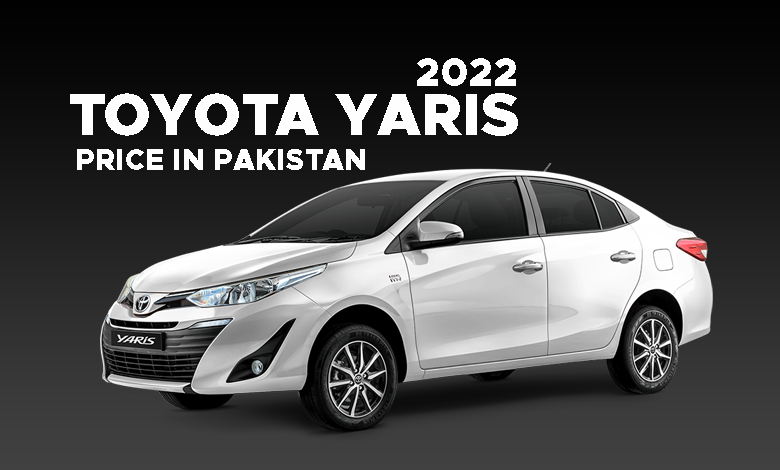 Toyota Japan introduced the latest and most stylish car Toyota Yaris in 2022. Toyota Yaris is a stylish subcompact car present in two different body styles named sedan and hatchback in different countries. A Sedan version of Yaris is available in Pakistan. Toyota Yaris 2022 price in Pakistan is affordable and it is in the best piece range for everyone. Yaris was initially launched in 1999 now many new models and styles of this car break the record in the market.

XP10 was the 1st generation launched in 1999 and amazingly it includes the features like a power mirror, power steering, power windows, and airbags.

XP90 was the 2nd generation launched in 2005 and this generation’s coupe body style was not present. In many regions sedan version is known as Belta and the hatchback is called as Vitz. Hyundai Tucson 2022 Price in Pakistan with new specs features and out door look.

The current generation of Yaris is 4th generation that was launched in the market in 2020. it was not launched in Pakistan and Pakistan is still using the 3rd generation sedan version of the Toyota Yaris. GA-B platform built this generation. 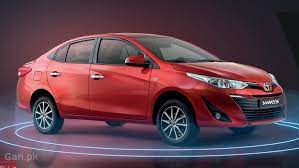 The exterior of the Toyota Yaris 2022 looks similar to that of the discontinued Xli and GLi but it is a little more hawkish. To represent Toyota models the front small grill is the trademark of the new Yaris as well. Four beam halogen headlamps are present in all the variants but daytime running lights, fog lamps, and partial chrome plating are present only in top variants.

The side view of the car is charming it includes body-colored door handles for base models and chromed door handles for the top models. All variants have body-colored side mirrors having integrated turn indicators. LED line guide rear lamps increase the beauty of the Rear- end of the car in lower variants while rear chrome garnish in three higher variants .Top two variants have the facility of a rear camera also. 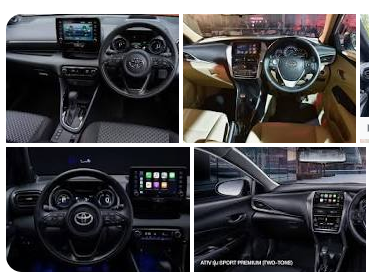 The interior of the Yaris is fabulous and sleek, top four variants include control switches for the steering wheel. Bluetooth and audio are controlled by steering switches in ATIV 1.3L trims and the top two variants have multi-information displays.The colour of the inner door handles is pigmented in two base variants, chromed in the top two variants and silver in ATIV 1.3L trims. Illuminated entry system, front personal lamp, and power windows are established in all variants. The facility of air conditioner and heater is available in all variants while auto air conditioning and climate control are present in the top two variants.

The 4 base variants include features like an in-dash touch audio system with 3 lines LCD display but the 6.8-inch capacitive Touch screen is installed in the top two variants. A higher number of speakers 6 are available in the top two models, 4 speakers in ATIV 1.3L and 2 speakers in 2 base variants. All variants allow Bluetooth, AUX connectivity, and two USB ports.The facility of two airbags and an immobilizer for safety is present in Yaris 2022. All variants are enriched by many advanced features for safety like hill start assist anti-lock braking system with EBD. Light reminder and key reminder warning is the best feature in all variants.

Toyota Yaris has many specification features as

All variants have a 15-inch standard tire size.

Pakistani market has different competitors for Toyota Yaris 2022 but the top competitors are Honda city, Changan Alsvin, and Proton saga.

Honda city and Yaris have many similar features like driver assist and safety .In some aspects Honda is spacious and gives good mileage than Yaris but Yaris is the best option when it comes to talking about fuel capacity engines and less price.

It is another influencing competitor in the Pakistani market it has many features same as Yaris 2022 and gives more amazing features like leather seats, rear speakers, good engine but Changan Alsvin cannot compete with Yaris 2022 in the feature of bigger size and higher fuel capacity.

It is a newly launched car in the Pakistani market and famous due to its low cost it has the same features as Yaris but Proton Saga cannot compete with the Yaris due to its lesser fuel capacity and small size.

In final words we can say that Toyota Yaris is the best car from all aspects its interior exterior everything is just perfect. Maintenance of this car is easy its spare parts are easily available. Price of Toyota Yaris 2022 in Pakistan is very economical. Its brake system is satisfactory. You can easily ride in this car on rough roads if you want a best enjoying journey you must consider it.